Continuation of the Syrian Horror

Before starting the article, I am enlisting a few Names, places, and terms for better understanding.

Hafez Al Assad: The President of Syria from 1971 to 2000. He was an Alawite. Allawi’s are a part of the branch of Islam centered in Syria following the Twelver school of Shia Islam.

Bashar Al Assad: Current President of Syria and son of Hafez Al Assad who is facing the rebellion in Syria due to various reasons as mentioned below in the article.

Kurds: The Kurds are the largest ethnic minority in Syria, comprising between 10% and 15% of the country’s population according to the Minority Rights Group International, CIA, and pro-government sources.

Syria is presently being ruled by the government of Bashar Al Assad; the son of Hafez Al Assad who was the president of Syria from 1971 until he died in 2000.

1973 marks the inception of the war that we witness today. Hafez Al Assad made a few amendments to the constitution. According to the earlier constitution, going back to the French Colonial Times, the office of the president was to be held by a Muslim. Hafez got the clause replaced by a redefinition of Islam of sorts. Secondly, he arranged for a respected Islamic jurisconsult to issue a finding that Allawi’s were Shia Muslims rather than heretics. The Muslim Community reprobated and resorted to violence at times. Hafez Al Assad’s aides were attacked and with this, the agitation began.

Beginning of the War

On 17th July 2000 when Bashar Al Assad took hold of the office of the President following the death of Hafez, he too faced strong resentment from the citizens. Peaceful protests were being reported throughout.  According to an internationally recognized news agency, in 2011 came the second incidence which led to the eruption of the extreme form of war and violence. A small group in the city of Daraa gathered to protest the failure of the government in helping the poverty struck farmers. A 14-year-old boy named Mouawiya Syasneh made anti-Assad Graffiti on the wall of his school. The local authorities took note of the incident, caught hold of Mouawiya and his aide, and tortured them.

Following this incidence of brutality, the commoners lost patience and gathered to protest heavily against the government and resorted to violence. In reply, the government ordered control of the situation and the army retaliated with arms. Casualties were reported. The War had begun.

Key entities and series of events

The segmentation started with pro-government forces on one side and anti-government on the other. Some army men formed a separate group called the Free Syrian Army which was anti-government being led by Mr. Maroof. Abu Qusai an engineer who was born in Syria, but was presently working in Dubai came back to his homeland to help the citizens. He was one of the most proactive elements in orchestrating weapons that were used by the rebels against the government.

By this time the situation was: 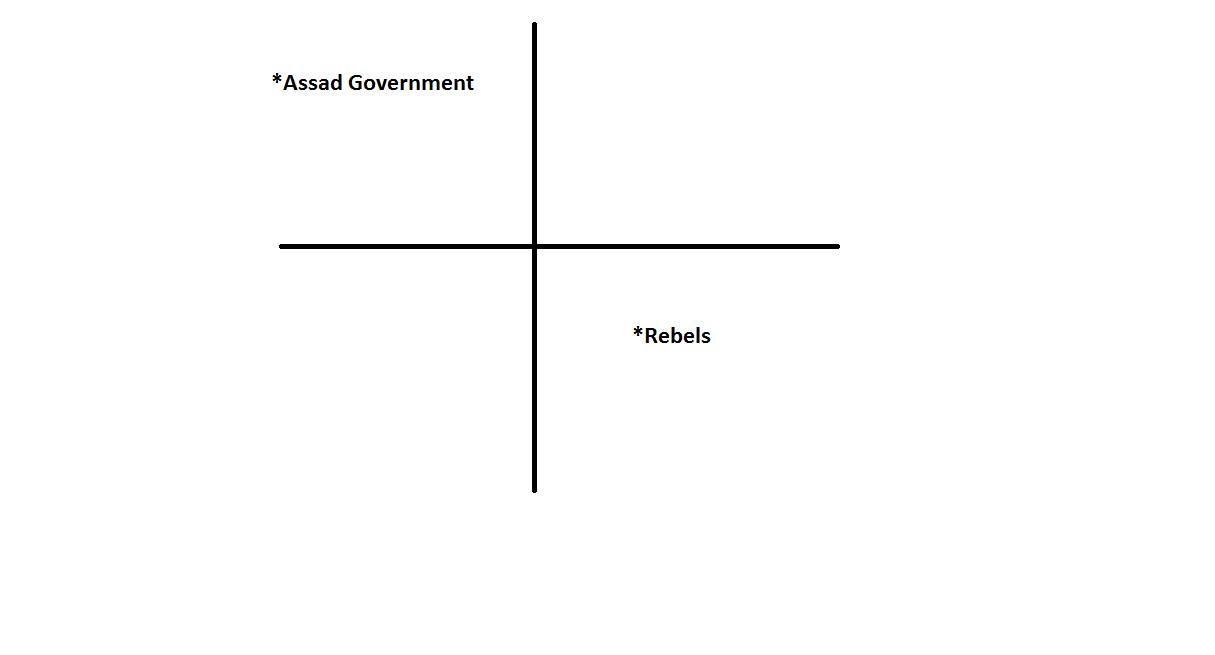 At this juncture, Bashar released Jihadist to counter the anti-government forces. Al-Qaeda entered the scene and formed a new wing in Syria called the Jab hat al Nusra.  The situation became Complex with the two new entries. Heavy bombarding continued from the government’s side. The death toll mounted and we saw no end to this war.

The Syrian Kurdish Groups now entered the war situation. Syrian Kurds had faced routine discrimination and harassment by the government. They had earlier sought autonomy and now resorted to taking up arms.

The war by this time became a global issue. Iran now entered in support of the Assad government. Considering this move by Iran, the Gulf States joined hands with the rebels to counter Iran’s Influence.

Hezbollah adds to the misery

Hezbollah now entered to support Assad. Hezbollah is a Shi’a Islamist militant group and political party based in Lebanon. They deployed their militia in Syria to train the local forces. Hezbollah was earlier seen as a resistance movement but with their proactive alliances in the Syrian war, their reputation was hit hard. To counter this move by Hezbollah, the Arab Countries started pumping in more money via Jordan to support the rebels.

The situation now had become deplorable. With the entry of these extremist organizations, the war had become deadlier. Innumerous lives had already been lost, and the end still could not be seen.

The United States assists the rebels

Barack Obama stepped in to monitor the situation and arranged for the training of rebels, but the program got stalled. They did not give up. They sent the CIA to train the rebels.

Now came the worst part. ISIS entered the war to fight against the rebels and the Kurds. White House responded promptly and soon ISIS was being bombarded by America. To strengthen their attack against ISIS, they launched another program that would focus only on fighting ISIS.

Turkey condemned Syrian President Bashar al-Assad over the violent crackdown on protests in 2011 and later that year joined several other countries demanding his resignation.

Turkey is at loggerheads with the Kurds. Mr. Erdogan the president of Turkey wanted to support the Syrian Opposition but also wanted to limit the autonomy granted to the Syrian Kurds that govern some parts of North-East Syria but are seen as a National Security threat by Ankara (Capital of Turkey)

In August, Turkey started bombarding Kurdish Groups in Iraq. Turkey did not enter into war against ISIS. America by this time had realized that the Middle Eastern states had other priorities.

What is more interesting to note is that at this Juncture, Russia entered to help Assad. This move strongly went in favor of Assad and they were able to capture Aleppo with the help of Russia and Hezbollah. Aleppo being one of the major centers of the economy for entire Syria had now gone into the hands of the Assad Government. At one point in time, Aleppo was strongly held by rebels. This incident is famously termed as the Death of Aleppo

The Assad government was already accused by the UNHRC of using chemical weapons in April 2014 and March 2015 in Talmenes and Sarmin respectively. Yet again, Assad resorted to Chemical Weapons in 2017. This was considered as one of the most nefarious moves by a government. This massive provocation led to the launching of Tomhawk missiles against the Assad army by America. They hit the government-controlled airbase at Shayrat.

Israel carried out air raids inside Syria, reportedly targeting Hezbollah and pro-government fighters and facilities. Syrian opposition fighters were evacuated from the last rebel stronghold near Damascus. However, backed by Turkey, the FSA (Free Syrian Army) took control of Afrin, near the Turkey-Syria border, from Kurdish rebel fighters seeking self-rule.

The Final Scenario can be understood as: 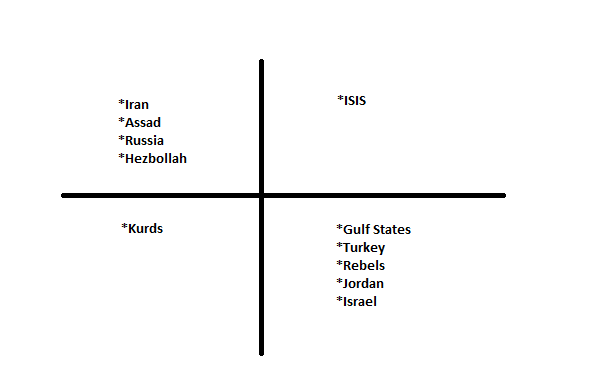 Idlib is a strategically located city in Syria sharing its border with Aleppo, Turkey, Damascus, and Latakia. It is the last rebel-held area. The City has been subject to a “de-escalation” agreement between Turkey, Russia, and Iran since May 2017.

In 2019 a military operation was carried out by the Syrian Armed Forces and its allies against rebel the rebel groups in northwestern Syria. This operation was famously termed as the Dawn of Idlib.

In a fresh series of events (2020) the Syrian army has recaptured major towns in southern Idlib and regained control over the Aleppo-Latakia (M4) and Aleppo-Damascus (M5) highways. Turkey has troops at 12 observation posts in Idlib.

My Take on the Situation

The war has plunged 80% of Syria into poverty. The figures mentioned above are enormous enough to raise our consciousness. The Livelihood of people has been obliterated. Syria has inevitably become a battleground for Proxy wars.

Not resorting to any kind of Jingoism, but at the least, we can raise our voice and ameliorate the situation via Social Media Platforms in the hope of a more sensible and altruistic World. In this battle of ego, power, and dominance the loser is surely the bloke. Being in different nation thousands of miles away, the situation in Syria may not affect our daily lives, but as sane human beings, we do have a moral responsibility to raise our voice against the atrocities being faced by the common man.

With this, I would like to end this article, but unfortunately, the war is still on.

Disclaimer: This article contains information gathered from various sources as mentioned above. This article has been penned for informative purposes, with no intention of provocation. The author does not accept liability for any errors, omissions, or damage resulting from the use of this article or facts therein.