SJVN Limited
(A Joint Venture of Govt. of India & Govt. of H.P.) 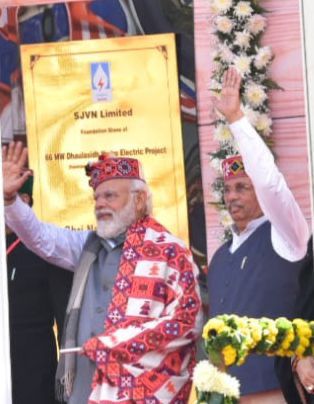 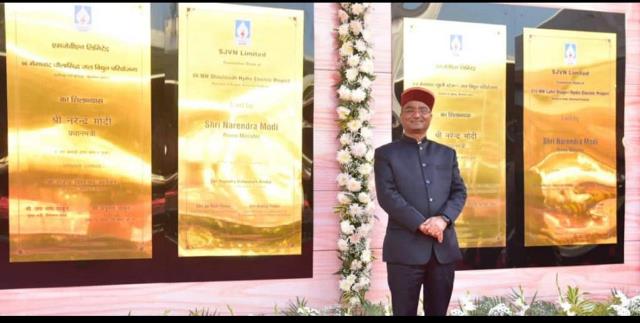 Nand Lal Sharma, Chairman & Managing Director, SJVN stated that in November 2020, Cabinet Committee on Economic Affairs chaired by the Prime Minister, 210 MW Luhri-1 Hydro Electric Project was approved at a Project Cost of Rs 1810 crore. The Project is scheduled to be commissioned by January 2026. On completion it would generate 758.20 million units of electricity annually. The project has also been accorded a budgetary support of Rs 66 crore.

Sharma informed that the salient features of Luhri-1 Project, involve construction of 80-meter-high concrete Gravity Storage Dam. Two main Penstocks and two Auxiliary Penstocks from the Dam would operate two Turbines of 80 MW each and two of 25 MW each respectively. The Surface Powerhouse would be at Toe of the Dam. Contributing to the preservation of environment, this project would lead to reduction in emission of 6.1 lakh tons of carbon dioxide annually from the environment. He added that Luhri -1 Project shall generate 20 Lakh mandays job opportunities while the State of Himachal Pradesh would immensely benefit with free power worth around Rs. 1140 crore during the Project Life Cycle of 40 years.

Sharma disclosed that the Government of India approved the Project cost of Rs 687.97 Crore for 66 MW Dhaulasidh Hydro Electric Project and has also accorded a budgetary support of Rs 21.6 crore for this project. The Project is targeted for completion on November 2025. On completion this Project will add 304 Million Units of energy annually.
Shri Sharma stated that the Salient Features of Dhaulasidh Project entailed construction of a 70-meter high Concrete Gravity Storage Dam which would feed Two Turbines of 33 MW each respectively. Project would have a Toe Dam Surface Power House and on completion would lead to reduction of 2.4 lakh tons of carbon dioxide from the environment, annually. He added that this Project would result in creation of 8 Lakh mandays employment opportunities while Himachal Pradesh would benefit with free power worth Rs. 461 crores from the Project.

N.L Sharma further briefed that Project Cost for 382 MW Sunni Dam Hydro Electric Project has been estimated at Rs 2614.51 crore which on completion is expected to generate 1382 million units of electricity annually. This Project would help in reduction of 11 lakh tons of carbon dioxide from the environment annually and Himachal Pradesh would benefit with around Rs. 2587 crore worth of Free Power.

Sharma stated that construction of these three Projects involve total outlay of Rs. 5113 crores and would add over 2444 million units of electricity generation to the Nation’s capacity annually. Besides providing with 100 units of free electricity per month for ten years to the Project Affected Families, these Projects on completion, would usher in an era of overall Socio-Economic development and prosperity in the region for generations to come.

Sharma expressed gratitude to Ministry of Power, Government of India & Government of Himachal Pradesh for reposing faith in exemplary expertise of SJVN in designing, constructing & operating Mega Hydro Projects. He assured that SJVN has always achieved its targets and is fully committed to complete these projects within stipulated time frame.
SJVN has business interest in generation of Hydro, Thermal & Renewal Power and in Power Transmission, with footprints in Himachal Pradesh, Uttarakhand, Gujarat, Maharashtra, Bihar, Uttar Pradesh, Punjab and in the neighbouring countries of Nepal and Bhutan. SJVN is aggressively poised in Business Expansion & Diversification with Internal Growth Targets of total installed capacity of 5000 MW by 2023, 12000 MW by 2030 and 25000 MW by year 2040.