Shares
BAHADURPUR/SITAPUR : Date : 24.07.2022., Our country has seen many revolutions taking birth and turning into success. On several occasions, on the call of time, the youth of the country has created their own history in different ways. ICN Media Group listened to the call of the present era and under its mission of ‘RURAL ENTREPRENEURSHIP’ and ‘VEER NAARI’ (Women Empowerment) for the economic and social  health and all-round development of the country, after many international and national places knocked in village Bahadurpur of Sitapur district of Uttar Pradesh. ICN is not only a journalism house, but it has also ensured its important role in the Rebuilding of India and giving message of  ‘Earn your own bread in your own village and give opportunity to two families to earn their bread’ in rural areas of India. In order to turn this dream of ICN into reality, the members of ICN assembled today in Bahadurpur village as friends of the village for the improvement and up gradation.
ICN International Media Group, born on the surface of human compassion, has the fragrance of the global personalities like Mahatma Gandhi, Dr. Norman Borlaug, Dr. Sarvepalli Radhakrishnan, Gurudev Rabindranath Tagore, Dr. APJ Abdul Kalam, Dr. BC Roy, and Major Dhyan Chand.
Hardik Murarka, Executive Editor-ICN is not only a source of inspiration to the region but has been working in his field for a long time to train the regional people and to cultivate success in his own soil by studying agricultural science from Australia.
When almost all the media houses of the country and the world around the ‘marketism’ and mob lynching their TRP, at the same time, ICN Media Group is creating new trails of development journey by organizing village to village fairs of rural entrepreneurship by connecting it at the grassroots level.
Under the mission of women empowerment ‘Veer Naari’, ICN called upon the regional women to come into the mainstream in the rural areas also and gave the slogan of self-reliance.
The regional community welcomed ICN with an open heart and attended this unprecedented event in large numbers. The program was presided over by Tarun Prakash Srivastava, Senior Executive Editor, ICN, Nazam Mustafa, Consulting Editor, ICN said that we have come to assure you that in today’s time there is no better option for development than rural entrepreneurship. We have come to show you those new paths on which you have to walk but you will definitely get the destination. We want to see the smile of success on your face.
GP Sinha, Editor, ICN said that if you all join your hands, your power increases a thousand times and then no task in the world is impossible. Ms. Naish Hasan, Associate Editor, ICN while addressing the rural women under ‘Veer Naari’ mission said that women are another name for power. This is the time to know your rights and to investigate the system and you all have the right to know and understand everything that affects your life and development in return for your given votes.
Prof. (Dr.) Shah Ayaz Siddiqui, Editor-in-Chief & Director ICN MSTRC said that ICN is present in 182 countries of the world through English language and 81 countries through Hindi language and we are glorifying India’s excellent civilization and culture at the international platform. ICN is such an international platform on which outstanding talents from different fields are present to make their selfless contribution for the upliftment of the country as well as the world.
Under the Rural Entrepreneurship Mission, Colonel Nilesh Ingle, Sr. Consulting Editor of ICN and Honorary Director of ICN MSTRC  has explored the unique crop pattern and developed special green fodder for animal feed. In the direction of women empowerment, the concept of ‘Veer Naari’ is also a gift of ICN to the society. The day the women of our country will come in the main stream of the country, prosperity will be reborn in India.
In the program, ‘Geet-Gita’, a translation of the Shrimad Bhagavad Geeta in poetic version written by Tarun Prakash Srivastava, Senior Executive Editor & Director ICN MSTRC was also released in said event. In the GITA, Lord Krishna gives the message of ‘World Welfare’ while explaining KARMA and ICN is also the carrier of this unique message of Lord Krishna.
At the end of the program, President of the program  Tarun Prakash Srivastava while welcoming the villagers said that only those countries are developed in the world for which their villages are their backbone. The global pandemic Corona has told us that we all have our roots in the villages. If our villages are not developed and strong then our country can never be developed and strong. He said that the dream of rural entrepreneurship and heroic women is possible only with adequate development of agriculture, education, crafts, folk arts and folk culture in the villages. He emphasized the establishment of libraries in every rural center and presented a copy of ‘Geet-Geeta’ as the first book announcing the establishment of a library in Bahadurpur area.
ICN distributed certificates of honor to many regional people for doing remarkable work in their respective fields. In the end, ICN presented a trophy to Bahadurpur village as a token of respect which was received by men, women and children as village representatives. 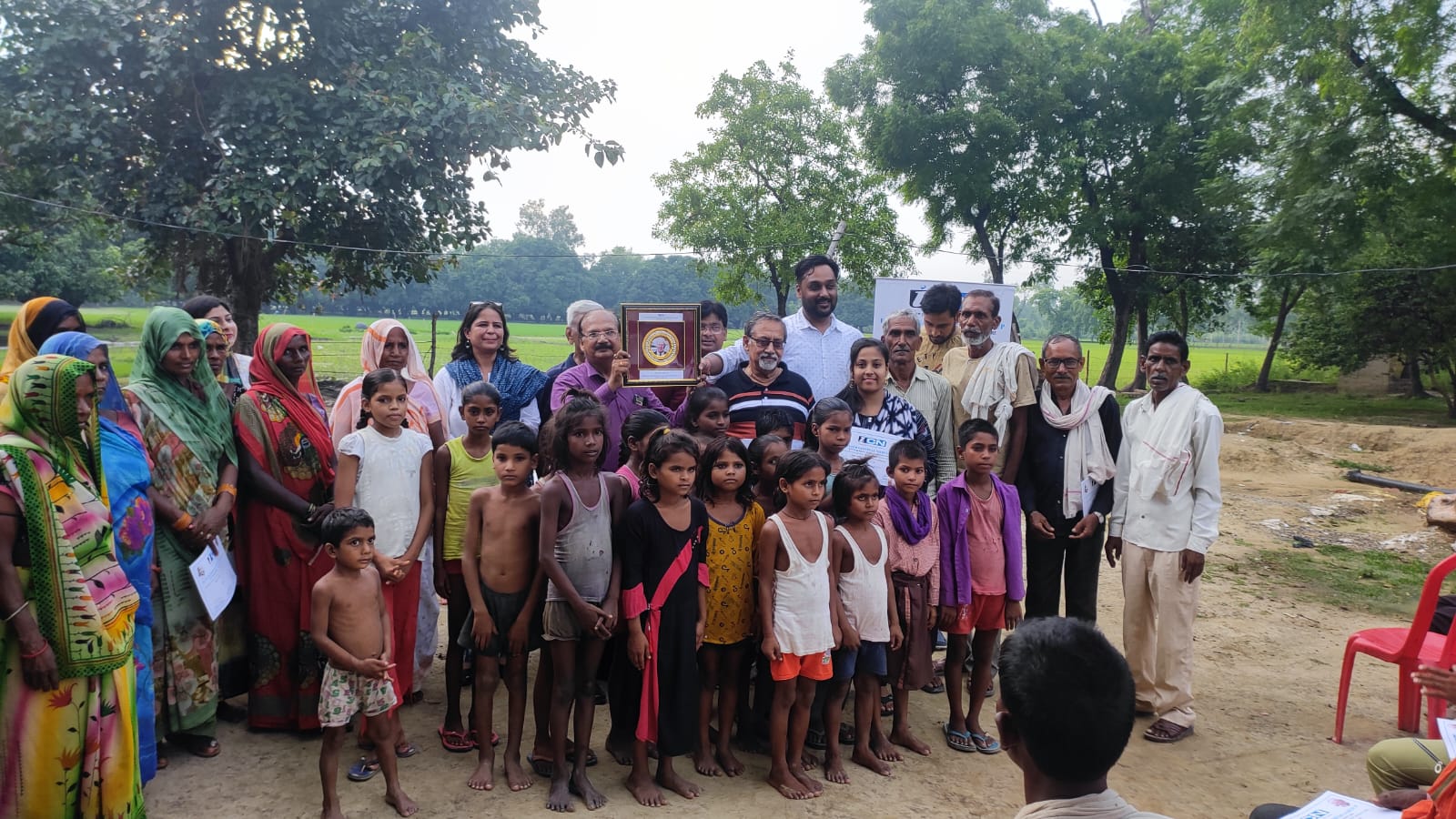