BANGKOK: United Nations Sustainable Development Goals (SDG) aims to end hunger and ensure access to nutritious and sufficient food by all people all year round by 2030.

Fish and seafood: There are several hundred species which are caught from the wild and consumed by human as sources of food which play important roles in supplying animal protein and other nutrients especially minerals. Acceptability of new species depends on their deeply rooted culture, tradition and taste.

Social media and increased communications across the globe have helped in having better understanding of food security problem.Knowing some aquatic species available in surrounding environment, accepting them for consumption and managing their population realizing their benefits to human health and the environment could enhance food security to a great extent.

Carps, the freshwater cyprinids, especially native to Asia and Europe, have long been serving as staple food to humans; whether they are captured wild or cultured in ponds. Common carp (Cyprinus carpio) might have begun about 3,500 BC in China in ponds in silk farms to utilize silkworm pupae, their faeces and decayed leaves of mulberry plants. However, the earliest written history of fish farming by a Chinese politician, Fan Li is only 475 years BC. Over the period when farming started expanding in China other carps might have emerged more important to grow together in the same pond such as grass carp (Ctenopharyngodon idella), silver carp (Hypophthalmichthys molitrix) and bighead carp (Aristichthys nobilis), as they feed on mainly grasses, phyto-planktons and zooplanktons respectively. In South Asia, three Indian Major carps; namely, Rohu (Labeo rohita), Mrigal (Cirrihunus mrigala) and Catla (Catla catla) with similar different feeding habits suitable for polyculture have been found to be farmed since long ago which is mentioned in Kautilya’s Arthashastra (321–300 years B.C.). In general, carps are grown in green water with limited or no feeding. They are very important in terms of nutrition security and are produced in large volumes especially in Indian subcontinent. They serve as staple food for many and also contribute to nutrition and health of hundreds of millions of people living in rural communities. Carps were also heavily promoted all over the developing world by several development agencies such as UNDP, FAO etc. with a view to supporting poor families for their nutrition security such as Bangladesh, Myanmar, Nepal, Pakistan and so on. Facilities were built for their breeding and nursing at many government stations. However, due to small Y-bones in the muscle, many people are afraid of eating fish. That has caused malnutrition problem. Alternative fish species are not available such as tilapia and pangasius which are becoming popular in many countries including in South Asia.

Tilapia is native cichlids of African continent found mainly in freshwater of shallow streams, rivers, ponds and lakes. There are nearly hundred species of tilapia. Amongst them, Nile tilapia (Oreochromis niloticus) or its hybrids with others such as O. mossambinus, O. aureus are commercially important ones. Their fast growth, short generation and frequent breeding behavior i.e. once a month, are favored by the farmers for farming (Bhujel, 2014; Suresh and Bhujel, 2018). More importantly, they feed on mostly planktons or low in food chain unlike many other carnivorous species which feed on other live animals or require high protein diets to grow. Tilapia become alternative to carps in South East Asia, and popular due to its boneless meat, good taste and the quality of meat. Most tilapias are grown in Asia and Latin America and consumed by families or sold in local markets. Tilapia the number fish species among aquaculture species. Annual production of tilapia has reached about 7 million tones overtaking the grass carp and silver carps. Its production is steadily increasing and doubling or tripling in each decade (Fig. 1). It has a great contribution to the food and nutrition security of the rural people. However, tilapia has not been considered good fish in South Asia and is still low-priced fish compared to carps. Moreover, its fillet can be exported to Europe, USA, and back to African countries. USA is the leading tilapia importer in the world. Tilapia became the fourth-most consumed aquatic food/species in 2012 within a decade of imports. Recent research and development on various aspects of farming such as production of monosex fry,5 broodstock development and management, feeding and others have contributed to the expansion of its farming (Bhujel, 2014; Bhujel and Perera, 2017). In various parts of the world tilapia is considered poor men’s fish; however, it contains the same level of nutrients as in other species. For examples, 100 grams of tilapia contains 94 calories, 19 g protein, 2 g fat (but no saturated fats) and 0 carbohydrates. In addition to these, tilapia is rich in niacin, vitamin B12, potassium, selenium and Phosphorus. Questions have been raised about its low level of omega-3 fatty acids. However, the main purpose of producing and supplying fish is for the protein, which is the main concern in rural areas and the developing countries. It is common that all freshwater fish species have low in omega-3 fatty acids and higher in omega6 fatty acids. Interestingly, tilapia grown in green water, which is common practice in developing countries, has relatively higher level of omega-3 fatty acids as compared to the ones grown in cages with complete feeds (Karapanagiotidis et. al., 2006). 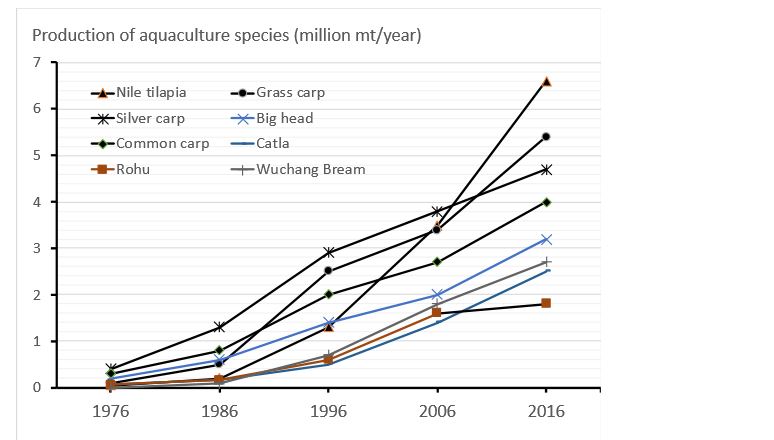 Pangasius is one of the aquaculture industries that had fastest growth during the early decade of this century. Vietnam led the industry where production increased from merely 50,000 ton in 1998 to 1.2 million mt in 2008 mainly due to export market. After that its production plateau around that (Table 2). Initially, it was exported to USA, later to Eastern Europe and then all over the world. White meat with mild flavor and favorable government policy, abundant water resource along the Mekong river and its tributaries, presence of processing industry and product certification, and emergence of feed industry all helped industry grow very fast. About 30,000-40,000 farmers grow Pangasius in Vietnam alone and over 200,000 people, mostly women, are involved in its processing industry supporting livelihoods of so many people along its value chain. Farming has expanded to several other countries such as Bangladesh, India, Indonesia, Malaysia and others (Table 2, FAO, 2018) due to its high productivity and profitability. Average production can reach over 400 ton/ha per crop in 6 month, when water is exchanged daily. Whereas in Bangladesh and India
farmers achieve 60-80 tons/ha per crop which is still a lot higher than the average productivity of carps. Although, Pangasius has not been accepted as good fish in Bangladesh and India, production has increased recently. As a result, price is still 2-3 times lower than that of carps. As its meat is soft and has no small bones, it has a great potential to be accepted by kids or adults and to contribute to the food security of the rural poor.

Conclusion South Asian countries have the highest malnutrition rates especially that of stunting in under-5 children. Causes of malnutrition are not only the unavailability and inaccessibility of food items, but it is the people’s choices which depend largely on deeply rooted mind-set, behaviors, cultures, customs, traditions and lack of nutritional knowledge. If we are committed to solve the malnutrition problem, we have to launch awareness campaign which is capable of change these. Changing the behviour and mindset of the people is not easy. People need to be ready to accept new ideas and food items shifting from traditional tastes and items such as from beef, milk, mutton, pork to fish and seafood. Similarly, within fish items people have to shift from carps to pangasius and tilapia which have the better scope to contribute to food and nutrition security.