NEW DELHI : Recently, just before the national budget 2020-21 tabled in parliament,15th Finance Commission submitted their report. Chapter 6 of the report is dedicated to Disaster Risk Management (FC used the term first time). Finance commission, for the first time allocated the budget for ex-ante risk reduction.It was considered that risk mitigation is a subject of development process and hence development should be set right. All the development investment should be made in such a way that it is resilient towards the exposure of disaster risk. In a way, this should be the spirit if we really wish to make resilient and sustainable development but this would be ideal for the new investment in infrastructure. What about the inbuilt infrastructure which is now at high risk and might impact heavily when disaster would strike. The spirit of the National Disaster Management Act 2005 for the creation of mitigation fund for ex-ante risk reduction is honoured by the finance commission which further got accepted by the government.

Hon’ble Prime Minister’s 10-point agenda for disaster risk reduction has also outlined about building financial resilience risk coverage to all. Agenda 2 states“work towards risk coverage for all – starting from poor households to small and medium enterprises to multi-national corporations to nation states”. Currently, in most countries of the region, penetration of insurance is limited to only middle and upper-middle income groups. We need to think big and also think innovatively. States have an important role in not just regulating but also encouraging coverage for those who need it the most.

In India, we have taken bold steps to ensure financial inclusion and risk insurance for the poorest. The Jan Dhan Yojana has brought millions of people into the banking system. The Suraksha Bima Yojana provides risk insurance to millions of people who need it the most. We have launched the Fasal Bima Yojana, which will provide risk cover to millions of farmers. These are the basic building blocks of resilience at the household level.These mitigation funds shall be used for those local level of community based interventions. However,large-scale interventions such as construction of coastal walls, flood embankments etc. which reduces for the year 2020-21 total amount allocated (NDRF, SDRF, NDMF, SDMF) INR 28,983crores. The 15th Finance Commission has also recommended allocation for long term disaster recovery fund. For using thisfund, state has to undertake detailed Post Disaster Need Assessment (PDNA) which will give clear indication of direct, indirect and need assessment for long term recovery. Out of the total amount of Rs 28983 crores, the share of SDRF shall be 80percent and share of SDMF 20percent. Within the SDRF allocation of 80percent, there would be three sub allocations – response and relief (40%), recovery and reconstruction (30%) and preparedness and capacity building (10%). While the funding windows of SDRF and SDMA are not inter-changeable, there could be flexibility for reallocation within the three sub-windows of the respective funds. (15 th finance commission report 2019). Risk mitigation fund to be utilised for   funding risk reduction at the community levels with small projects. For bigger projects separate projects to be designed and executed. For the utilisation of all new funds( reconstruction and rehabilitation-Rs 12412crores , capacity building  and preparedness –Rs. 4137 crores, and mitigation fund- Rs 8275 crores, Ministry of Home Affairs and National Disaster Management Authority (NDMA) have been asked to draft a guidelines for the same .

Disaster Recovery in India is a big challenge. In the absence of resources in most of the disasters , long term recovery has not attempted. Super Cyclone Orissa 1999, Gujarat Earthquake 2001, Tsunami 2004, Kashmir earthquake 2005, Bihar flood 2008 are few exceptions. All these were supported by the World Bank and ADB. May be funds allocated by the 15th FC now may boost up recovery.  There is a huge funding gap between total availability of funds and funds required for the long-term recovery. Recovery from a disaster can present many unexpected challenges – those directly affecting financial recovery, such as delays in restoration, continuing operations and generating revenue, unexpected costs and challenging insurance claims. These and similar issues make it difficult to project the outcome of a catastrophe and manage expectations within the organization. Financial preparedness creates a solid foundation for a more resilient, timely and effective recovery process. It maximizes financial recovery through insurance and other sources; and, in doing so, minimizes economic loss. In short, it can mean the difference between significant financial loss and substantial recovery. Critics of disaster risk finance often argue that investing to avoid or reduce risk is more cost-effective than investing in post-disaster expenditures. They also argue that insurance and other risk transfer instruments can be opaque and expensive, providing poor value to governments.

Recently,there were two recent disasters by which people got affected seriously. The assistance from SDRF and NDRF including Prime Minister and Chief Minister could not meet the requirements. Disaster Recovery in India is a big challenge. There is a huge funding gap between total loss occurring due to disaster and total requirements of the long-term recovery. Recovery from a disaster can present many unexpected challenges – those directly affecting financial recovery, such as delays in restoration, continuing operations and generating revenue, unexpected costs and challenging insurance claims. These and similar issues make it difficult to project the outcome of a catastrophe and manage expectations within. The two recent disasters, one Kerala floods 2018 and Cyclone Fani of Odisha 2019 have almost lost INR 26000 crore to 28000 crores. Hence, the recovery cost of Kerala disaster recovery which  is almost 27000 crores approx. whereas of Odisha is Rs. 28000 crores approx.(PDNA Kerala, Odissa)  These losses and subsequently dovetailing of development funds failing state in achieving the desired growth rates and hence creating “Growth Gap”. These funding gaps could be covered by certain percentage but not all. Insurance as a financial tool has not been mentioned in finance commission report. In many countries, ex-ante insurance is being utilized as one of the tools for post disaster recovery. As we may see in the globalcontext,how economic losses are covered by insurance reduces the pressure on public exchequer and how much are still not recovered –uninsured loss. India too suffered with huge loss as average annual loss due to disaster is US $9.8 billion in last 20 years (UNDRR, October,2018) is constantly hammering for better ex-ante risk management system. India’s Policy on DM 2009 and National Plan 2016 aligning with Sendai Framework of DRR 2015-30 ispositive. 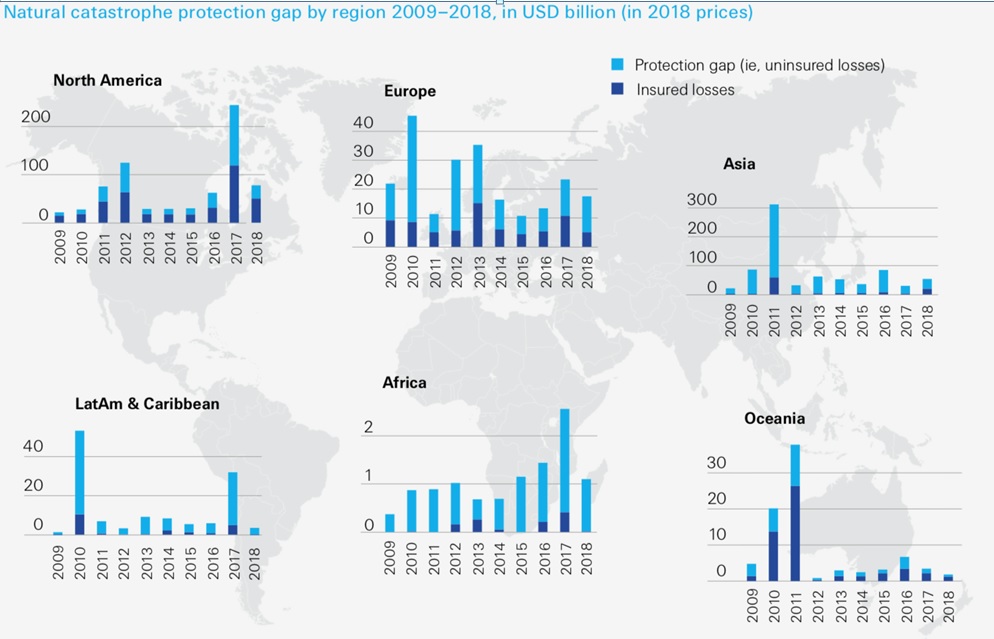 Protection gap is huge in Asia and in Africa which are having the high exposure of risks due to disasters. The pattern is almost the same in every disaster occurring in these two regions. Climate change has further aggravated and intensified the disaster impact and effect.

The similar pattern is seen in the South Asia region (fig 2). This region is affected more by hydro-meteorological disasters.One thing is very remarkable in the region especially India, where deaths due to disaster has reduced substantially. This could happen because in the past few years many initiatives have been taken by central and state governments. 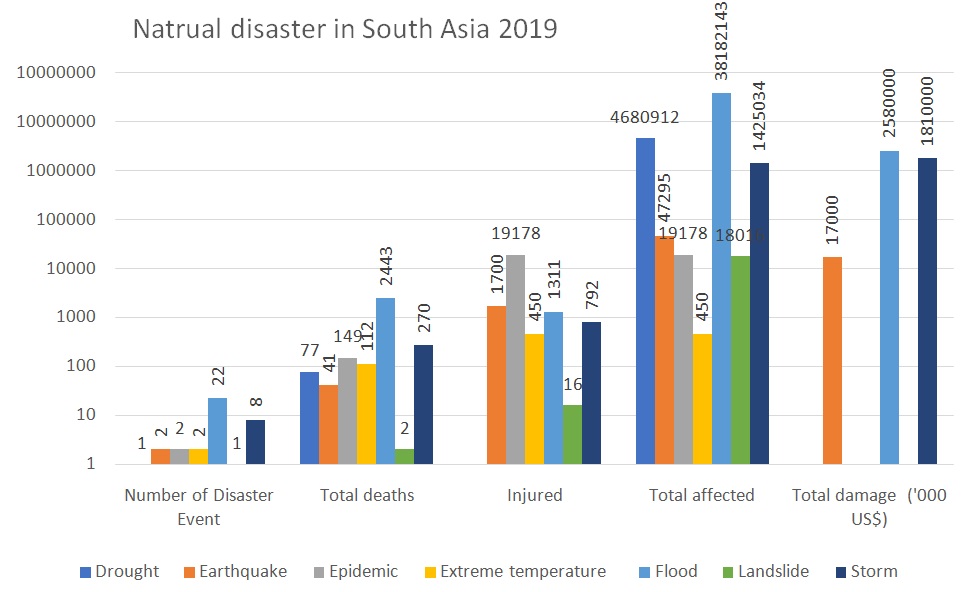 Economic loss is still enormous. This is affecting development and the public exchequer. Poor getting poorer and settling just with the ex-gratia amount given as post disaster relief by the government. There is an urgent need to address these economic losses and building financial resilience. For addressing infrastructure /economic loss, Govt of India has taken a very good initiative in the year 2018 and could establish CDRI for promoting resilient infrastructure. This is an opportunity for MHA and NDMA to see how the newly created mitigation fund, disaster preparedness funds and recovery and construction funds along with ex-post response fund could get integrated with catastrophic insurance for bringing holistic resilience building.

To conclude, it is suggested that in the light of new recommendationsmade by the 15th finance commission regarding creation of mitigation fund, it was a long awaited but a welcome step in the direction of disaster risk reduction. It is certainly going to give new impetus in reducing disaster risk and economic losses  but might not be very      substantial. There is still a gap in building financial resilience. Along with the mitigation, disaster recovery and response funds, there is an urgent need to bring risk financing, insurance, re-insurance and risk transfer mechanism for building resilience. As many countries have adopted insurance as a strength for building resilience,India should also give some space to insurance in financial planning of disasters. Attainment of PM 10-point agenda and Sendai framework would become easier and people will have resilience towards their disaster risks.